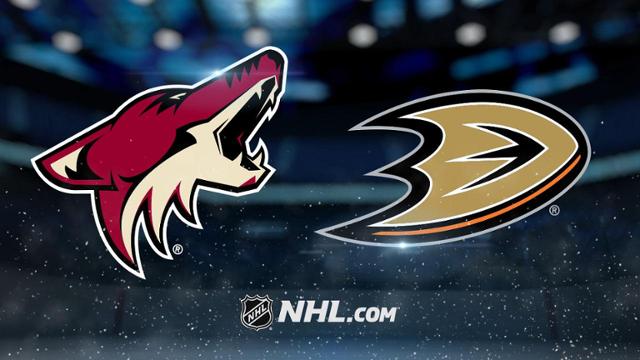 In their second head-to-head meeting of the regular season, the Anaheim Ducks and the Arizona Coyotes take the ice at Gila River Arena. This divisional matchup will get started at 9:30 p.m. ET on Wednesday, November 27, and it’s being televised live on KCOP.

The Coyotes are 14-11 straight up (SU) and have earned 2.5 units for moneyline bettors this season. That winning percentage, the second-best in the Pacific Division in this young season, is a welcome improvement over the 39-43 record from the 2018-19 season campaign. Of the team’s 25 games this season, eight have gone under the total, while eight have gone over and just one has pushed. Thus far, the team is 6-6 SU at home.

Arizona has converted on 18.4 percent of its power play chances this season, a mark that’s right around league average. On the other hand, its penalty kill is ranked 21st overall, and it’s successfully killed off 80.3 percent of all penalties.

With a .934 save percentage and 28.3 saves per game, Darcy Kuemper (nine wins, seven losses, and one OT loss) has been the primary goalkeeper for the Coyotes this year. If the Coyotes choose to rest him, however, the team could go with Antti Raanta (5-4-4 record, .926 save percentage, 2.62 goals against average).

Nick Schmaltz and Alex Goligoski will both lead the offensive attack for the Coyotes. Schmaltz (19 points) has put up four goals and 15 assists and has recorded two or more points four times this year. Goligoski has one goal and 13 assists to his credit and has recorded a point in nine contests.

Anaheim has lost 4.2 units for moneyline bettors thus far and is currently 11-14 straight up (SU). 14 of its matches have gone over the total, while 11 have gone under the total and none have pushed. As a road team , Anaheim is 4-8 SU.

Anaheim has converted on just 10.6 percent of its power play opportunities this year, a figure that’s ranked 31st in the NHL. On the other hand, its penalty kill unit is ranked 22nd overall and it’s successfully killed off 77.4 percent of all penalties.

John Gibson (.912 save percentage and 2.86 goals against average) has been the main option in goal for Anaheim. Gibson is averaging 29.0 saves per game and has eight wins, 11 losses, and one overtime loss to his credit.

Ryan Getzlaf (nine goals, 10 assists) and Jakob Silfverberg (nine goals, nine assists) have been standout playmakers for Anaheim and will lead the attack for the visiting Ducks.

The under has hit in four of Arizona’s last five games.

The Ducks are 1-5 when they serve fewer penalty minutes than their opponent and 5-7 in games where they’re in the penalty box for fewer than 10 minutes, total.