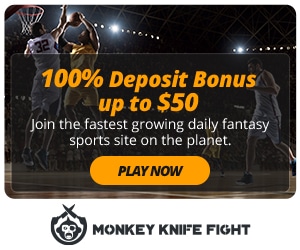 The amount of competition in the legal sports wagering landscape has brought us a lot of different ways of enjoying our favorite sports and teams. We know about sports betting after PASPA was overturned. We know about the traditional titans of daily fantasy sports like DraftKings, FanDuel, and Yahoo.

Let’s talk about what Monkey Knife Fight is, where you can play it, what you can play, and how to get started.

What is Monkey Knife Fight?

Along with being the fastest growing daily fantasy site in the world, Monkey Knife Fight is also the most unique. Unlike the traditional DFS and regular fantasy sites that are just about picking players and seeing how everything adds up in the aggregate, Monkey Knife Fight has more of a prop betting feel to it. Rather than enter full-team contests against a whole bunch of people, some that could be pros with lineup creation tools, you enter more of a peer-to-peer environment by going up against somebody on your level.

MKF utilizes the Contest Matching Engine to pair similar users against each other in the field of combat. Opponents are selected based on experience level, win percentage, and additional factors as determined by the engine.

Where Can I Play Monkey Knife Fight?

Unfortunately, not all jurisdictions allow Monkey Knife Fight, but with legal sports betting sweeping the nation, more and more states will get on board with all forms of gambling, including some of these newer DFS operators.

Astute observers will notice that some of the states listed here are some of the strictest when it comes to gambling of any kind, particularly sports gambling. That is because of the way that MKF is structured. It is more about head-to-head matchups than some large-scale pool with a lot of competitors.

What Can I Play on Monkey Knife Fight?

This is where it gets really fun. Contests are currently offered with football, basketball, baseball, hockey, golf, e-sports, and soccer.

There are three types of contests at Monkey Knife Fight:

Stat Shootout – The Stat Shootout contest gives users the opportunity to pick which stat they want to focus on. For example, on an NFL Sunday, a user may decide that he wants his team to rack up touchdowns. Maybe on a Tuesday night in the summertime, it will be all about home runs. Three-pointers. Birdies, Saves. Passing yards. It doesn’t matter what stat you pick. You will just go head-to-head with the players that you picked against a target goal. Exceed that goal and you win!

Rapid Fire – The Rapid Fire contest is a little bit different. In the Stat Shootout, you set the goal you want to achieve and win or lose based on whether or not your team gets to that number. In the Rapid Fire contest, you go head-to-head in matchups against the players that you didn’t choose. If you win the right number of matchups, you will win. The right number of matchups will be determined by the players available and the buy-in.

More or Less – This one is pretty self-explanatory as you want to pick more or less than the posted number. For example, if Baker Mayfield’s passing yards are set at 277.5, you have to pick more or less. Perhaps it makes more sense to say over or under. In any event, you draft your team by picking as many of these more or less props as required to win the prize show prior to entry.

Three ways to win, lots of ways to have fun.

How Do I Get Started?

Monkey Knife Fight accepts credit card and debit card among several forms of payment. If you sign up and deposit through us here at ATS, you will get a nice boost to your initial bankroll, so that is something to keep in mind. Contests range from $0 freerolls to $1,000 buy-ins, so deposit accordingly based on your bankroll and risk tolerance.

When you do want to withdraw your winnings, withdrawals are initially paid back on the method of deposit and then a check is sent for any additional amount, so keep that in mind when choosing how you want to add funds.

Beginner contests are available for those that are just starting out, so you can familiarize yourself with the format and the software. Users with fewer than 50 previous contest entries can play in the Beginner contests and more experienced players are restricted from joining.

Why Should I Join Monkey Knife Fight?

Because it provides a unique and revolutionary spin on the DFS world. You aren’t going to be forced to go up against a whole bunch of professionals with models and spreadsheets and really deep bankrolls. The Contest Matching Engine ensures a level playing field to give everybody the chance to win some money and have some fun.