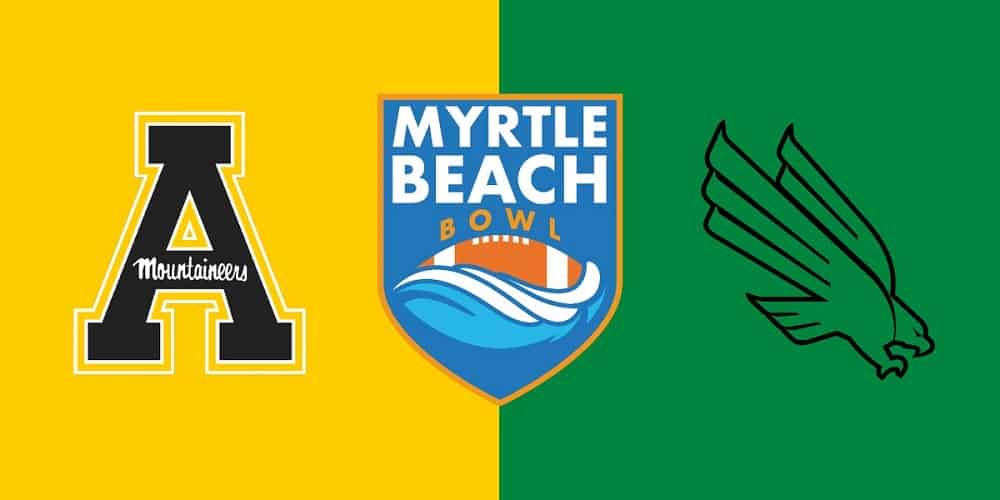 The 2020 Bowl Season gets underway on Monday, December 21, 2020, when the Appalachian State Mountaineers (8-3) face the North Texas Mean Green (4-5) in the Myrtle Beach Bowl. App State finished second in the Sun Belt – East and North Texas finished fourth in the Conference USA – West division. This game will air live on ESPN at 2:30 p.m. EST.

Through 11 regular season games, the App State offense averaged 31.8 points per game and 435.3 yards per game, 191.7 through the air and 243.5 on the ground. Camerun Peoples led the team with 807 rushing yards and seven touchdowns, and Thomas Hennigan had a team high 45 receptions for 571 yards and three touchdowns. Defensively, the Mountaineers allowed just 19.3 points and 313.5 yards, 169.8 passing and 143.7 rushing.

Last time out, Appalachian State used a big second half to come back and beat Georgia Southern 34-26 on the road. The Eagles led 17-7 at the half, and the game was tied heading into the fourth quarter, but App State scored 17 of the 26 fourth quarter points to get their eighth win of the season. Zac Thomas went 18/29 for 208 yards, two touchdowns, and one interception. Nate Noel had a big day with 13 carries for 103 yards and one touchdown. Defensively, App State allowed 349 total yards and forced four Georgia Southern turnovers, three interceptions and one lost fumble.

North Texas finished off their regular season with an exciting 45-43 road win over the UTEP Miners. The Mean Green trailed 21-17 at the half, but they scored 28 of the next 35 points to take a three score lead midway through the fourth quarter. UTEP scored two late touchdowns to make this one close, but North Texas held on for their fourth win of the season. Austin Aune went 16/29 for 302 yards, five touchdowns, zero interceptions, and added an additional touchdown on the ground. Jaelon Darden exploded for 173 yards and four touchdowns on eight receptions for North Texas. Defensively, the Mean Green allowed 497 total yards and forced four UTEP interceptions.

CFB Predictions: I like App State -19.5 to cruise to the cover.