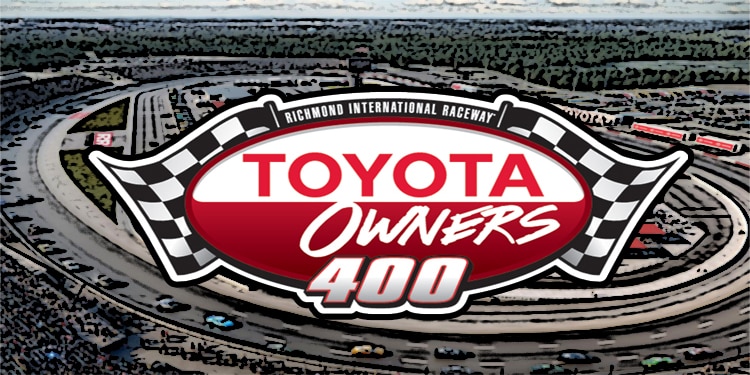 Will a Toyota win the Toyota Owners 400? The Joe Gibbs Racing team certainly hopes so, as Martin Truex Jr. and Denny Hamlin are the top two choices on the board at DraftKings Sportsbook for the ninth race of the 2021 NASCAR Cup Series season.

The NASCAR season has stabilized after a weird and wild start to the year. The last five race winners have been Kyle Larson, Martin Truex Jr., Ryan Blaney, Joey Logano, and Truex again after we saw Michael McDowell, Christopher Bell, and William Byron secure playoff spots with victories.

We’ll see if status quo remains the theme this week at Richmond Raceway.

You can bet on a lot of different NASCAR things as the week goes along at DraftKings Sportsbook and you can do it with the help of a Deposit Bonus worth up to $1,000 if you sign up through us at ATS.

Martin Truex Jr. is the +400 favorite in his Toyota for the Toyota Owners 400. We’ve got some serious symmetry there, much like the symmetry of Truex winning both races at Richmond in 2019.

Denny Hamlin has not won at Richmond since 2016, but he has seven top-five finishes in eight races thus far during the 2021 season, so he is a deserving second favorite at +600. Brad Keselowski is the unquestioned third favorite at +700. Though he does not drive a Toyota, he won the September race here last year and has had some good success at this track.

Kyle Larson, Joey Logano, and Chase Elliott do not drive Toyotas either, but they are ahead of JGR team member Kyle Busch, whose six wins are the most among active drivers here. Larson and Logano are +800, with Elliott at +850 and Busch at +900.

Hamlin and his run of top-five finishes top the standings by more than 70 points over his JGR teammate in Truex. Hamlin has yet to win a race, but his 126 stage points are 50 more than Ryan Blaney, who sits in fifth place. Blaney has the last laugh with a win, though.

Truex is second, followed by Logano, Larson, and Blaney. Since winning at Homestead-Miami, Byron has five straight top-10 finishes. His fourth last week at Martinsville was his highest finish since that win. Elliott’s second last week was his second runner-up finish and it put him into seventh place. Harvick has not finished in the top five in his last five starts, but still sits eighth in points.

Keselowski is still in search of a win and is ninth in points. Bell rounds out the top 10. Kyle Busch, Austin Dillon, Ricky Stenhouse Jr., Chris Buescher, and Kurt Busch round out the top 15.

Richmond is a .75-mile D-shaped oval, so we’ve got short-track racing again this week after the run around the Paperclip last week. There are some guys that are really good on short tracks and some that are not. Most of the drivers that excel on short tracks have done well here.

This is actually one of the better non-big tracks for Kyle Larson, who does have a win here and some other top finishes. Larson usually runs well at places like Michigan, a big 2.5-mile track. For whatever reason, this short track suits him well.

His success pales in comparison to some others, though. Kyle Busch has six wins here and nine top-10 finishes in his last 10 starts. Of course, Kyle also has two wins in his last 66 races, so he’s a hard bet to make this week.

Truex has led 970 of the 4,006 laps that he has been on the track for over the last 10 races. His 396 points in that span are second to Keselowski, who had that win last year and has four total top-five finishes over his last 10.

As we look at this one, there aren’t a ton of options. We are highly, highly unlikely to see a winner from off the board. It will be a single-digit price. It will probably be one of Hamlin or Truex. With Hamlin’s price a couple dollars higher at +600, I’ll take him to break through and get that win this week.

I also like the way that Kyle Larson has been running. He ran a solid fifth on the short track last week and his only bad finishes have been the Bristol Dirt Race, which was a mess, and then the Daytona road course. On unrestricted ovals, Larson has been fourth, first, seventh, second with two stage wins, and fifth. That’s good enough for me to take a shot.

For a different perspective on the race, check out what Brian Blessing had to say on our ATS YouTube page: