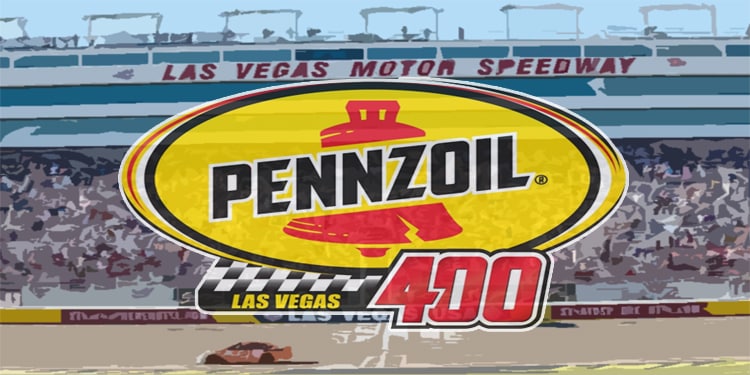 NASCAR goes to everybody’s favorite spot, Las Vegas, for this week’s Pennzoil 400. The men of the Cup Series have to be in awe of what has transpired over the first three weeks of the season. Michael McDowell, Christopher Bell, and William Byron currently occupy three of the 16 playoff spots available. Perhaps we wind up with more than 16 winners out of the 26 regular season races, but we haven’t had that problem since the playoffs started.

Another 1.5-mile opportunity is here for the drivers that regularly win races, so we’ll see if Las Vegas looks more like the races we’ve seen over the last several years. The Pennzoil 400 Presented by Jiffy Lube is on Sunday March 7 at 3:30 p.m. ET and will be the first of two races at Las Vegas. The other will be in the NASCAR Cup Championship Playoffs.

At time of writing, all that DraftKings Sportsbook had posted were the odds to win, but as the week goes along, you’ll see a lot more in terms of matchups, group matchups, and props. Sign up at DraftKings and get up to a $1,000 Deposit Bonus with a 20% Deposit Match and a Risk-Free Bet.

BET ON NASCAR AT DRAFTKINGS WITH A DEPOSIT BONUS UP TO $1,000

In surveying the odds to win from DraftKings Sportsbook, we see Martin Truex Jr. up at the top of the board at +600. Kevin Harvick is +650, followed by Team Penske teammates Brad Keselowski and Joey Logano at +700. Denny Hamlin is +900.

The three race winners have all been a surprise and have all hit at big prices. McDowell was +6600 when we wrote the Daytona 500 preview. Bell and Byron were both up over 25/1. Hopefully you’ve done well with the head-to-head matchups and the group action because I’m not sure many people had a piece of those three guys. Maybe we need to expand our considerations.

Judging by how things have gone this season, maybe Alex Bowmanat +2500 and Aric Almirola at +4000 are at the top of the list, since everything seems upside down this season.

Through three races, Denny Hamlin and Kevin Harvick are still first and second in points and Joey Logano is third. In that respect, it seems like business as usual for the Cup Series. In every other respect, it has not been. Harvick and McDowell are the only two drivers with three top-10 finishes. Hamlin has two top-five results and also three stage wins, so he’s pretty regularly had the top car, but hasn’t gotten it across the line first.

Chase Elliott sits fifth in points and should have probably won the road course race at Daytona, but finished 21st after leading Stage 1 and finishing with the most laps. Kurt Busch, Bell, Kyle Larson, Truex, and Keselowski round out the top 10.

Sixteen playoff spots go first to race winners and if there are more than 16, then points come into play. With 26 regular season races, we’ve never really seen a scenario with more than 16 race winners. We very well may this time around with some new tracks, more road courses, and general chaos.

Keselowski has three wins here in just 15 starts. Truex, Harvick, and Logano each have two. The Busch brothers have the others among active drivers. Kurt’s came in last year’s playoff race on a track where he has actually performed quite poorly in the past.

Kyle, Harvick, and Keselowski have seven top-five finishes each. Remember that up until 2018, Las Vegas Motor Speedway was only a once-a-year stop in February or March. Now it hosts the playoff race that was stripped from New Hampshire.

Ryan Blaney and Larson have nine starts each here with three top-five finishes and six top-10 finishes. Those are two guys you want to take a look at this week, though Blaney is off to a very slow start. Larson had a good car last weekend on the 1.5-mile track at Homestead-Miami.

As far as guys that struggle at Vegas, Hamlin is winless and only has three top-five finishes in 18 starts. This is a rare bad track for him, but in saying that, he’ll probably win this week. Elliott also has issues here. He’s only finished on the lead lap in four of his eight starts, though he does have two top-five finishes when he has finished the race with the others.

Betting NASCAR outright winners is really tough right now with what we’ve seen, but don’t let William Byron’s win at Homestead-Miami discourage you. This is still a 1.5-mile track and still a place where the best should be the best. Larson at +1000 makes the cut for me this week, as he keeps getting more and more comfortable behind the wheel for Hendrick Motorsports.

Ford has done well here with wins in four of the last five in this race and Keselowski’s 2018 playoff race win. That means a look at Logano at +700 and then a long shot gamble on Almirola at +4000.

SIGN UP AT DRAFTKINGS SPORTSBOOK AND GET UP TO $1,000 WITH YOUR DEPOSIT BONUS

For more on the Pennzoil 400, Brian Blessing has his perspective on the race in this YouTube video: