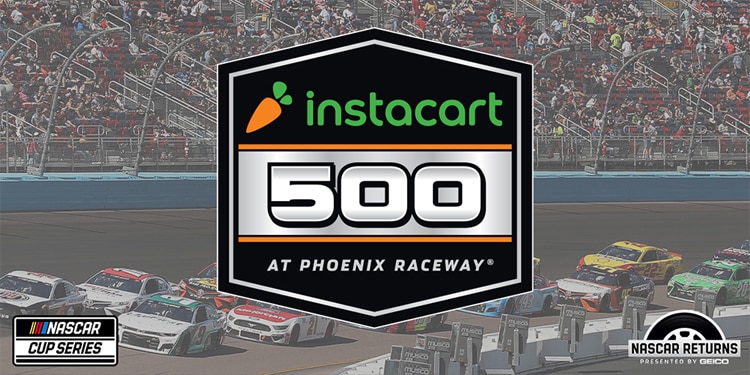 The Instacart 500 brings a new sponsor to the table for the NASCAR Cup Series, but this is a very familiar track and those in search of status quo are likely to find it here. It remains to be seen if we’ll really have the true status quo, which would mean a Kevin Harvick victory, but he is the favorite for Sunday’s event at Phoenix Raceway.

Odds for this race are courtesy of DraftKings Sportsbook, which is usually first in the legal US market to post odds for NASCAR Cup Series events. At time of writing, only outright odds were posted, but DK offers a lot of props, matchups, and top-three or top-five finish props. It is a good place to bet on NASCAR and everything else and they’ll give you a head start on your bankroll with up to a $1,000 Deposit Bonus when you sign up.

BET ON NASCAR AT DRAFTKINGS WITH A DEPOSIT BONUS UP TO $1,000

Chase Elliott is your +550 favorite per the folks over at DraftKings Sportsbook. Brad Keselowski is actually the second favorite on the board at +600. Denny Hamlin and Kevin Harvick are listed at +650. Kyle Busch and Joey Logano are both marked at +800. All of the usual drivers are up at the top of the betting board this week at DK.

It is crazy to look at the four race winners that we’ve seen so far. Michael McDowell, Christopher Bell, William Byron, and then last week’s winner, Kyle Larson. Larson is not that big of a surprise all things considered, but keep in mind that Larson’s win at Las Vegas was only the seventh of his career in 229 races.

A lot of guys that don’t get to the winner’s circle have done so this year. Four of the 16 playoff spots have already been claimed. If this trend keeps up, we’re going to see a very heightened sense of urgency from the drivers that go into the middle of the season without a win.

Though he doesn’t have a win, Denny Hamlin leads the way in points with 187. He’s well out in front of Brad Keselowski, Kyle Larson, and Chase Elliott. Hamlin’s 62 stage points are 25 more than anybody else, so he’s had some good cars, but hasn’t quite been able to seal the deal. Perhaps it happens this week at Phoenix, where he has had some good runs in the past.

Hamlin is the only driver with three top-five finishes in four races. Harvick, Keselowski, and Larson each have two. Nobody has four top-10 finishes. Hamlin is the closest, having finished 11th at Homestead-Miami.

Harvick has nine wins at Phoenix Raceway. Nobody else has more than three. Harvick has been the best and most consistent driver at this track over his career. Kyle Busch has actually been better than Harvick over the last 10 races, though. In fact, there are some seriously eye-popping numbers for Busch in his last 10 Phoenix starts.

Busch has led 680 laps over those 10 races. He’s won twice and has eight top-five finishes and nine top-10 finishes. His average finish is 3.6th place. He’s averaging a top-four finish, which is simply ridiculous.

Harvick has led 317 laps in that span. He’s finished in the top 10 in all 10 races with two wins and seven total top-five finishes. His average finish is 4.5th place. Both drivers are a little snakebitten, though. Busch can’t seem to win anything these days and Harvick, who was the favorite nearly all of last season, failed to finish in the Final Four going into the Championship Race at Phoenix.

Larson has five top-five finishes here in his last nine starts. Hamlin also has five over his last 10. This looks like a race where the notables will do something notable, but we’ve said that before this season and it hasn’t happened.

While DraftKings didn’t have those listed at time of publish, there are a few things to consider. Ford ran really well here last year in the two races, holding seven of the top 10 spots in the Championship Race and five of the top 10 in the early race, including three of the top five.

Team Penske drivers have done very well here, so that would be Keselowski and Logano. Maybe this will be the week in which Ryan Blaney actually shows up. That should help you with matchups and also group matchups.

Drivers to Bet to Win

There are a lot of drivers that run pretty well here and do so consistently. The Penske guys. Kyle Busch. Harvick. Hamlin. There are a lot of top drivers that are going to be in the running here and all of them are more or less good bets. This is like one of those golf tournaments with an elite field. It would be hard for a long shot to rise up and beat a bunch of the sport’s best.

Logano is the one on my card this week. He’s a very aggressive driver and only has six lead lap finishes out of his 10 starts, but he’s won two of those. He and Keselowski have both had really good cars this season, but I’ll give Logano the nod for my money.

If you wanted a long shot, and in this crazy year, it might not be a bad idea, Erik Jones only has four lead lap finishes in eight starts here, but all four have resulted in a top-10 finish. Jones might not be a bad idea in a matchup or a prop, but it would be the worst few bucks you’ve ever spent to take a shot on him at +12500.