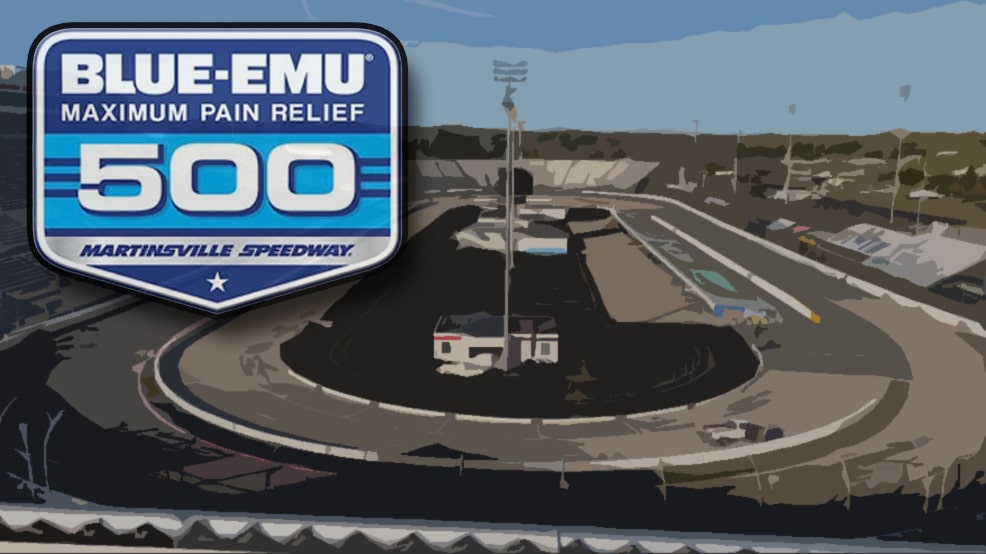 The overlap between race fans and golf fans probably isn’t all that large, but the NASCAR Cup Series still made a good call to run the Blue Emu Maximum Pain Relief 500 on Saturday night. Running up against the final round of The Masters could have had a pretty big impact on ratings, but racing under the lights at Martinsville Speedway will remove any and all concerns about that.

After taking last week off for the Easter holiday, the drivers will be back behind the wheel in hopes of conquering the Half Mile of Mayhem on The Paperclip in Ridgeway, Virginia. We’ll break it all down for you and take a look at some guys to bet and some guys to fade for Saturday night.

Whether you are betting on this weekend’s NASCAR race or any of the other things happening, you can do it at DraftKings Sportsbook with the help of a Deposit Bonus worth up to $1,000.

Be sure to check out our DraftKings Bet $1, Win $100 bonus offer page as well for some good opportunities this week and this month in MLB and the NBA.

The NASCAR betting odds for the Blue Emu Maximum Pain Relief 500 show Martin Truex Jr. as the appropriately-priced +500 favorite to take the checkered flag that he has taken twice in the last three races at Martinsville.

Chase Elliott and Brad Keselowski are both lined at +600 to secure their first wins of the Cup Series season. Through seven races, we’ve had seven race winners, but Elliott and Keselowski have not made it to Victory Lane as of yet.

Neither has Denny Hamlin, who is +700 along with Bristol Dirt Race winner Joey Logano. Hamlin has six top-five finishes to this point and is the points leader, but he has yet to cross the finish line first. He also hasn’t finished higher than third, but he’s been up at the front of the pack a lot. Logano had two runner-up finishes prior to his win at Bristol.

Ryan Blaney is the only other driver in single digits at +800, followed by Kyle Busch and Kyle Larson at +1200, Kevin Harvick at +1400, and then a big gap down to guys like Alex Bowman and William Byron at +2500.

It is nuts to see Kevin Harvick at +1400 outside of a gimmicky race like the Bristol dirt event, but Harvick has struggled mightily. He only has two top-five finishes and something seems to be misfiring with his team. He enters this race eighth in points. Hamlin is the points leader, with Logano second, Truex Jr. third, Larson fourth, and Keselowski fifth.

Hamlin’s 108 stage points are far and away the most of any driver. Logano is second with 65. Harvick only has 24, which is why he’s listed so far down the board. He simply has not contended in a lot of races this season.

With seven races and seven race winners, playoff spots are dwindling. The top 16 make the playoffs, but if all 16 drivers have a win and finish in the top 30 in points, then there will be no wild card spots. This short-track race and next week’s at Richmond will be big for a lot of guys.

Who has been money at Martinsville? Recently, nobody has been better than Brad Keselowski. Over the last 10 races, Keselowski’s average finish is 3.8th place. He’s been in the top 10 all 10 times, in the top five nine times, and has two wins. It would be hard to argue taking him this week, even with the fairly short price.

Keselowski’s 433 points over the last 10 races are the most, but Kyle Busch has the most laps led in that span with 942. Keselowski’s 720 are actually third behind Busch and also Martin Truex Jr., who has the two recent wins to go with three other top-five finishes. Busch has seven top-five outcomes in that span.

When you look at the top eight drivers in points over the last 10 races at Martinsville, the list is basically a who’s who of drivers. Keselowski, Busch, Truex, Logano, Blaney, Elliott, Hamlin, and Harvick. If you’re barking up the long shot tree, this probably isn’t the race for it.

Pick a driver with a single-digit price and hope he wins. While Kyle Busch has had lots of success here, he hasn’t had much success recently. The 10/1 price is pretty juicy, but that’s because Busch has just two wins in the last 65 races. He’s priced like that for a reason.

I’ll trust what Keselowski has done here and put him on the card. We don’t have any recent data points besides Bristol as far as short tracks go, but if we look back to last year, you have to like Keselowski’s wins at Richmond and Bristol and also his third at Martinsville.

Chase Elliott also ran very well on the short tracks and a win is coming for him, so those are the two I’d take.

For more insights on the race, check out Brian Blessing’s thoughts from our ATS YouTube page: