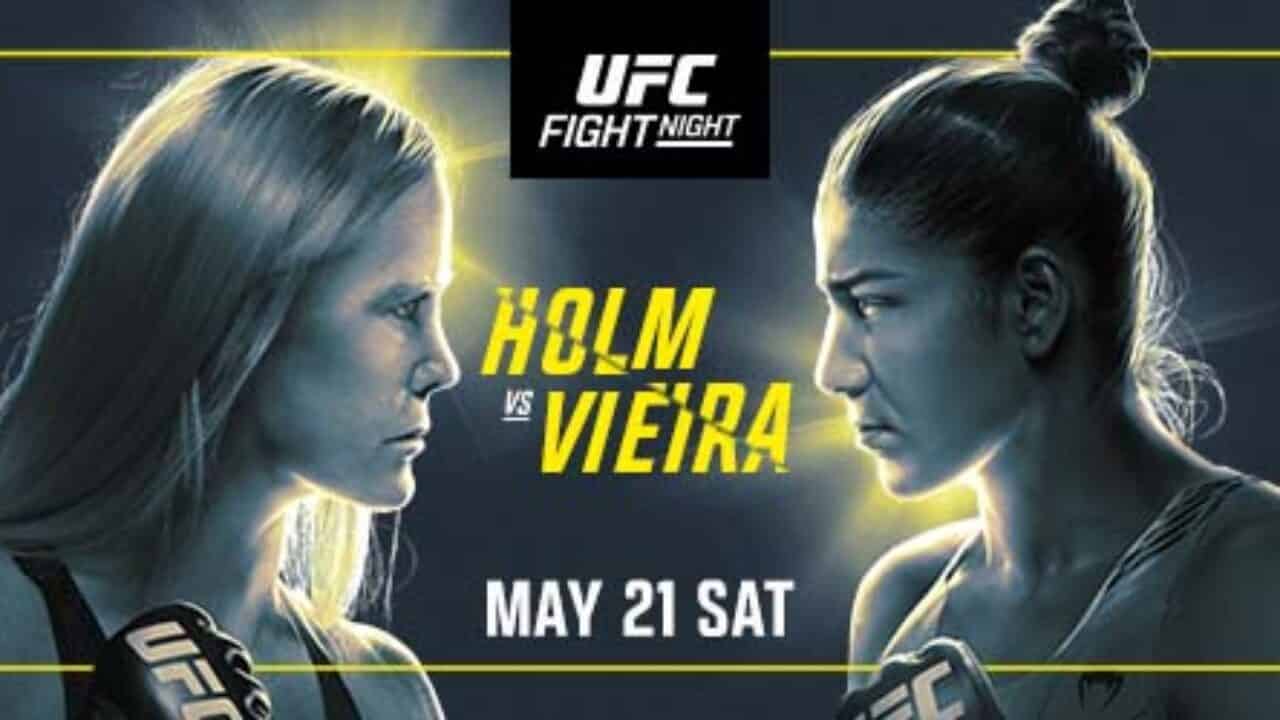 UFC Vegas 55 is Fight Night Card originating from the UFC Apex in Las Vegas, Nevada. UFC Vegas 55 is on the lower end in comparison to other Fight Night Cards. The co-main event between Santiago Ponzinibbio and Michel Pereira is certainly the highlight of the card. That fight will bring more excitement than the Holly Holm vs Ketlen Vieira main event. We have an early start time for UFC Vegas 55. The card kicks off at 4PM EST on Saturday, May 21st, 2022. There is a lower count of fights on the card, with just 11 total.

Caesar’s sportsbook has the best offer for the UFC Vegas 55 Fight Card. They are offering first bet insurance on any fight that is good for any amount, up to $1100. This means that even if your first bet loses, you will be credited with the same amount for a free bet. With three very strong favorites and a strong probability of success, this offer is perfect to try to get a plus figure on a big first bet!

After a blazing hot first four months of 2022, we hit a wall on the last two cards. It is similar to an NBA player that is simply not getting shots to fall, and the slumps generally do not last very long. Our bets went 0-3 last week, but there were two underdogs so the juice was not a real bankroll killer on a night like that.

Our first bet of the night was Angela Hill as a moderate underdog against Virna Jandiroba. Hill lost a non controversial decision. She clearly spent her entire camp training grappling, as she was quite competitive once taken down, but the defensive minded game plan was her undoing. Her wrestling failed her and there was not the normal volume nor aggression in her striking. Hill averages nearly 5.5 significant strikes per minute, but landed just 21 in the entire fight.

Our next bet was another sizeable underdog in Amanda Ribas. This is the fight where I dare say we had a bit of a robbery. Ribas lost a split decision and I think the judges got that one wrong. Ribas landed takedowns in the form of judo throws in each of the first two rounds. She notched a couple minutes of top control each time, and each judge gave her the first round but not the second round. That is totally understandable. The topic if debate in the community was whether to reward that top control time. What very few were realizing, is that Ribas out struck Chookagian 33-19 in that third round and clearly won the round. No one with sense debating the scoring was giving Chookagian that third round… yet two of three judges did. As the icing on the cake, we found out after the fight that RIbas had a full rupture of a biceps tendon 25 days before the fight and lost the most vital training and prep time. That was a maddening loss.

The last loss, came in the exact and specific way I thought it could. For everything I wrote about Ion Cutelaba in his fight with Ryan Spann, the Spann guillotine was what Hulk needed to be fully aware of. After three takedowns in the first two minutes, Hulk got sloppy and the guillotine got put in on him. Cutelaba could have done a bit more homework, but such is the fight game. We will be back and better this week.

UFC Vegas 55 is not the worst Fight Night card we have seen, but certainly lacks real draw. The women’s bantamweight main event is needed in the bantamweight rankings, but is one that will be hard pressed to draw in a multitude of viewers. The Pereira vs Ponizibbio co-main event will do a better job of that.

The main event is between two ladies in the top five of the women’s bantamweight division. Holly Holm currently sits at number two with Ketlen Vieira sitting at number five. Holm is a -245 favorite in the five round fight.

The line may be just a tick wide, as Vieira answered some questions on her striking in her most recent fight. She was able to land quality volume in an extremely competitive main event win with Miesha Tate. Vieira also showed a gas tank that was a huge question mark, albeit in a fight without a world of grappling.

Holly Holm put on a master class in her most recent fight with Irene Aldana. It should be noted Aldana starched Vieira in Round 1 of their 2019 fight. Holm is not the type of fighter that will shut the lights off with that power shot. Particularly not at 40 years old, but she does have the striking edge in this matchup.

Holm will have to win that striking battle, because Vieira is quite dangerous on the mat. Where Holm beat Aldana with constant movement and a wonderful blending of striking and takedowns, I believe she will only have the striking path available to her in this fight. That is not to say she will not be able to land takedowns. It is to say that landing takedowns will put her in danger against a superior grappler. That holds particularly true early on in the fight. There may be less danger in that path later in the fight if Vieira’s gas tank is fading.

I believe this fight plays out predominantly on the feet, and it is difficult to foresee Holm not having the volume edge. She is a better striker than Vieira’s last opponent in Miesha Tate, and can press that advantage. The line is fair, perhaps just a tick wide, but there is no value to attack in this main event. Look elsewhere for betting options on this card.

The Santiago Ponzinibbio vs Michel Pereira co-main event is quite clearly the best fight on this card, and it will be a real banger. Ponzinibbio will be entering his fourth fight since a three year lay off from injury. In his return, he was knocked out early by a lesser fighter, but that has shown to be a one off outlier. In the two fights since, he has had entertaining wars with Miguel Baeza and Geoff Neal. He beat Baeza but dropped a correct split decision to Geoff Neal.

Michel Pereira is the ascending fighter here, bringing a four fight win streak with him. He is rising through the ranks and his last three wins have come against Khaos Williams, Niko Price and rapidly ascending Andre Fialho. Those wins have all come via decision, but none have been difficult calls. Pereira has abandoned the majority of his showboating and big capoeira actions in the octagon and tightened his game to win fights and be the best fighter he can be. He has a very technically sound and accurate striking game when he keeps it tight, and has a strong wrestling and grappling skill set as well. He is also huge for the weight class.

We are going to get some very fun striking in this matchup, and both fighters are overly capable of pouring on damage. The striking truly could go either way in this one, and it brings real intrigue as to how it plays out. If there is any grappling in this fight, it will come from Pereira, and that could truly be the wild card. If the striking is not going his way, he can opt to take the fight down. Additionally, if rounds are playing out close, again, he can take the fight down.

I do lean Pereira in a fight I am quite excited to watch, but not quite confident enough to mark him a dedicated betting pick. In any event, this is the fight to tune in to for entertainment purposes on Saturday.

The other nine fights on the card do not bring a world of intrigue in terms of the levels the fighters are at. What we may well find are some fun finishes. Four of the nine remaining fights have an inside the distance line of -185 or higher. It will also be intriguing to see how Jailton Almeida fares at heavyweight.

We will still have solid betting plays to make on this card. Despite there being just 11 fights and main events and co-main events that do not offer betting value, we still have three betting plays. Two of those plays will be ITD bets on favorites and the other will be a flat play on a small favorite with a real stylistic advantage. Let’s get to them.

Click the links below for a full breakdown with recommended betting picks and analyses.