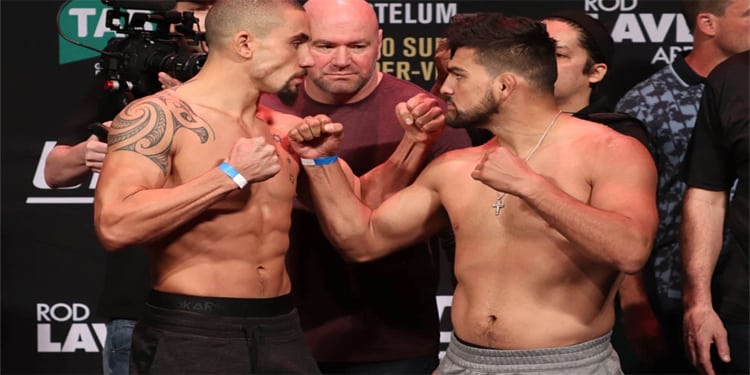 Imagine you’re sitting down to dinner at a steakhouse. You’re really excited about the nice, big cut of meat you’re about to get, but it is suggested by your significant other that you order a salad first.

You’re a carnivore. A meat eater. Greens and vegetables are the annoying things that simply get in the way of a good meal. You’d rather just eat the pretzel breadsticks or a seafood appetizer, but you know better than to start that fight.

If UFC 261 is a nice, dry-aged strip steak, then UFC on ESPN 22 is an overdressed, wilted lettuce salad.

It may be counterintuitive to talk down a fight card with a preview we’d like you to read, but sometimes you just have to tell it like it is.

The way it is at BetMGM Sportsbook is that you can get up to a $600 Deposit Bonus when you sign up through ATS.io. Whether you use it on this UFC card or on something else, it will certainly go a long way to helping out your bankroll, so give them a try this weekend.

The Main Event – Gastelum vs. Whittaker

One spot that does appear ripe for a bet on this card is the main event. It will be Kelvin Gastelum against Robert Whittaker. It was originally supposed to be Paulo Costa vs. Gastelum, which could very well have been an even uglier fight for the underdog. Gastelum is +210 with Whittaker -250 in a short-notice favorite role.

Whittaker was picked as the replacement about a month ago for this fight. Maybe Whittaker hasn’t been as impressive as some had hoped, but the reality is that his only loss in the last seven years has come against Israel Adesanya. He’s beaten everybody else the division has thrown at him.

He’ll also have a size advantage here over the shorter middleweight in Gastelum, who has fallen on some hard times in his career. Gastelum will have to hope to get this to the mat to wrestle with Whittaker, but I’m not sure he’ll be able to in the main event.

Whittaker -250 is a decent bet on its own, but we can add a parlay piece with that.

Nothing against Justine Kish, but three losses in her last four fights is not a very good look, especially since the 33-year-old went two years between her loss to Ji Yeon Kim and her win over Lucie Pudilova. She suffered her first career stoppage loss last time out against Sabina Mazo.

Now she draws Tracy Cortez, whose only loss came in her Invicta debut. Since then, she’s 8-0 with seven definitive wins. The only one that wasn’t was her split-decision win over Erin Blanchfield, who was supposed to debut last week, but her opponent missed weight.

Cortez has some pretty good wins in the UFC to her name already, including a Contender Series win over Mariya Agapova in which both fighters were given contracts.

This is sort of a microcosm of the card as a whole. Drakkar Klose has losses to David Teymur and Beneil Dariush, who are probably the two best he’s seen in UFC. Then there’s Jeremy Stephens, who has lost four straight fights and has won in over three years.

Klose is the short underdog, which says a lot about what he’s done in the UFC up to this point. Stephens used to headline cards, but that was a long time ago for the 34-year-old. He was 12-1 when he made his UFC debut. He’s 28-18 now. That’s not a great record at all.

It is a similar thing here. Kudos to Chase Sherman for working his way back to UFC to score a win over Ike Villanueva, but can we really trust him against Andrei Arlovski? Do we really want to bet on the 42-year-old Arlovski in his 41st professional fight?

This really is the case for a lot of fights. Guys that just don’t seem worth your hard-earned betting dollars.

Same thing here. Who wants to bet on Abdul Razak Alhassan? He’s missed weight and been knocked out in each of his last two fights. He’s a -300 favorite, so that says a lot about Jacob Malkoun.

It’s a fair question, right? Along with the Whittaker/Cortez parlay, I’d look at Alexander Romanov for his fight against Juan Espino. Espino is a great story and he has a bit of a reach advantage here, but the 40-year-old has eight submission wins and just one knockout to his name.

Romanov is the -140 favorite with multiple paths to victory, as he’s 13-0 in his career with five knockouts and eight submissions. He’s 10 years younger than Espino. Wins over Roque Martinez and Marcos Rogerio de Lima seem to suggest that the step up in class to UFC isn’t too big for him. I think this Espino fight is a setup to get him a better heavyweight opponent once crowds are fully back.

As far as underdog looks go, Zarah Fairn might be a good look at +115 against Josiane Nunes. Fairn has six inches on her opponent here and her UFC losses are to Megan Anderson and Felicia Spencer. Those are some tough early assignments. Spencer went 25 minutes with Amanda Nunes in her last fight and Anderson just lost to the champion Nunes, but at least she got a shot.

This is a drop down to bantamweight for Fairn, which may suit her better. I like the underdog in this fight.

GET UP TO A $600 DEPOSIT BONUS FROM BETMGM SPORTSBOOK