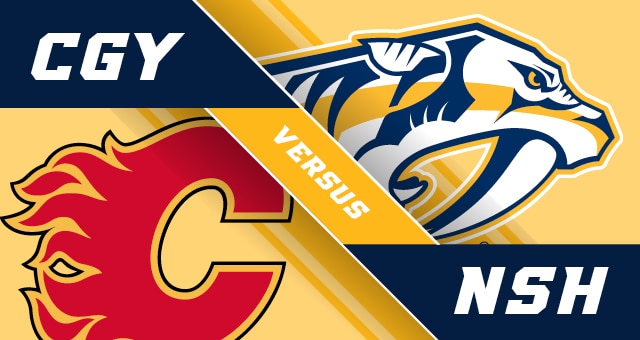 The Calgary Flames, fueled by Matthew Tkachuk and Johnny Gaudreau, are ready to take the ice against Roman Josi, Filip Forsberg, and the Nashville Predators at Bridgestone Arena in a Western Conference showdown. The opening faceoff will be at 8 p.m. ET on Thursday, February 27, and it’ll be showcased live on Sportsnet West.

Calgary is 33-31 straight up (SU) and has lost 5.5 units for moneyline bettors this year. 31 of its contests have gone over the total, while 28 have gone under and just five have pushed. As the away team this season, the Flames are 19-15 SU.

Calgary has converted on 20.1 percent of its power play opportunities this season, a mark that’s right around league average. On the other hand, its penalty kill is ranked eighth overall, and it’s successfully killed off 82.4 percent of all penalties..

Averaging 27.8 saves per game with a .908 save percentage, David Rittich (24-21-5) has been the best option in goal for Calgary this year. If head coach Geoff Ward decides to rest him, however, Calgary may turn to Cam Talbot (9-14-1), who has a .914 save percentage and 2.83 goals against average this year.

Over on the other bench, Nashville is 31-31 straight up (SU) and has lost 11.7 units for moneyline bettors this year. 34 of its outings have gone over the total, while 27 have gone under and just one has pushed. It’s 15-16 SU at home this year.

The Predators have converted on just 16.7 percent of their power play opportunities this season, a figure that places them in the bottom 10 overall among NHL teams. On the other hand, its penalty kill is ranked 31st overall, and it’s successfully killed off 74.4 percent of all opponent power plays.

Pekka Rinne has denied 25.0 shots per game as the primary option in goal for the Predators. Rinne has 18 wins, 17 losses, and four OT losses to his name and has registered a poor .900 save percentage and 3.00 goals against average this year.

Eight of Calgary’s last ten games have been decided by two goals or more. The team is 6-2 in those games.

The Flames are 15-13 when they serve fewer penalty minutes than their opponent and 24-22 in games where they’re in the box for fewer than 10 total penalty minutes.

Nashville is 3-3 in games decided by a shootout this season while Calgary is 6-1 in shootouts.

The total has gone under in four of Nashville’s last five outings.

Calgary skaters have averaged 9.0 giveaways over its last five home games, an improvement from its season average of 11.8 giveaways per game (ranked 26th in the NHL).