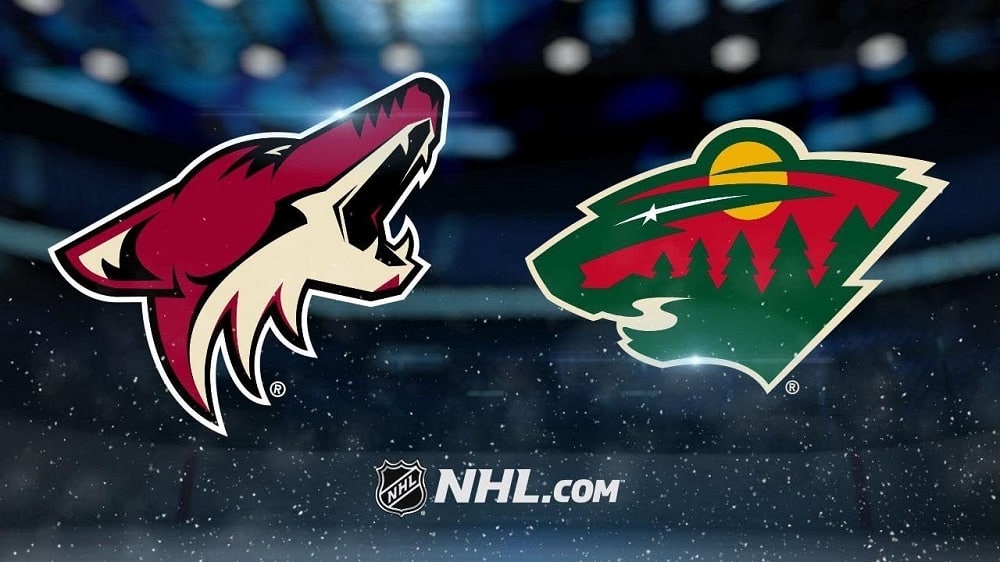 The Arizona Coyotes and Minnesota Wild will wrap up a three-game series at Xcel Energy Center in Saint Paul, Minnesota, this Tuesday night, and the Wild will look to sweep the Yotes and take a 4-1 lead in their eight-game regular-season series.

Minnesota opened as a firm -187 moneyline fave on William Hill Sportsbook. The Wild blanked Arizona 4-0 as -200 favorites this past Friday and earned a 4-1 victory as -190 favorites on Sunday night, so let’s see what’s the best betting pick for Tuesday’s game.

The Arizona Coyotes (12-12-4) are winless in three straight outings and dropped to the sixth spot of the West Division, five points behind the No. 4 seed. If they want to keep the pace in the playoff race, the Yotes have to improve on both sides of the puck.

Over the last few years, the Yotes have been one of the better defensive teams in the NHL, while their offense has been a big issue. They continue to struggle offensively, but the Coyotes’ D has declined a lot this term.

Arizona yields 2.96 goals per game and ranks 18th in the league. The Coyotes own the eighth-best penalty-killing percentage (83.5%), but they’ve allowed the fourth-most power-play opportunities (97). Darcy Kuemper is sidelined with a lower-body injury, so Antti Raanta has guarded the cage in three of Arizona’s last four games including Sunday’s loss at Minnesota.

Minnesota closes down a five-game homestand

The Minnesota Wild (17-8-1) are searching for their fifth straight victory. After a couple of big wins over the Vegas Golden Knights, 2-0 and 4-3, the Wild dismantled the Coyotes this past weekend. Cam Talbot patrolled the crease against Arizona and posted 46 saves in total along with a shutout on Friday night, while Kirill Kaprizov exploded for a hat-trick in that 4-0 victory over the Yotes.

Interestingly, the Wild scored all four goals in Friday’s clash in the third period, while they overcame a 1-0 deficit on Sunday and netted three times in the final period.

Kirill Kaprizov leads the way for Minnesota this season, tallying 10 goals and 14 assists through 26 appearances. The Wild score 3.19 goals per game (12th in the NHL) on a 10.4 shooting percentage (tied-10th), while their power-play percentage is the worst in the league, as Minnesota netted just seven times on 83 opportunities (8.43%).

Minnesota is arguably a much better team than Arizona. The Wild have been playing in excellent form over the last few weeks, so I’m backing them to stay on the winning path. However, I don’t feel comfortable with the puckline, although the odds are quite tempting at +135.

As I’ve mentioned, the Coyotes lean on their defense. In the previous two games against Minnesota, they’ve allowed only one goal through the first two periods. Still, without Darcy Kuemper between the pipes, I don’t think Arizona will have enough firepower to outlast the red-hot Wild.

Minnesota will miss winger Marcus Foligno who’s recorded 16 points so far, but the Wild have plenty of dangerous weapons in their arsenal. Their power-play execution is a major issue, and I think Minnesota will start banging some goals with the man advantage sooner rather than later.

Hereof, I’m backing the over at +115 odds. Six of Minnesota’s last nine games produced six or more goals in total, but only one of Arizona’s last five contests saw more than five goals on the scoreboard. Still, the Coyotes have to score some goals if they want to win, while their defense will have a tall task to slow down Minnesota’s offense.