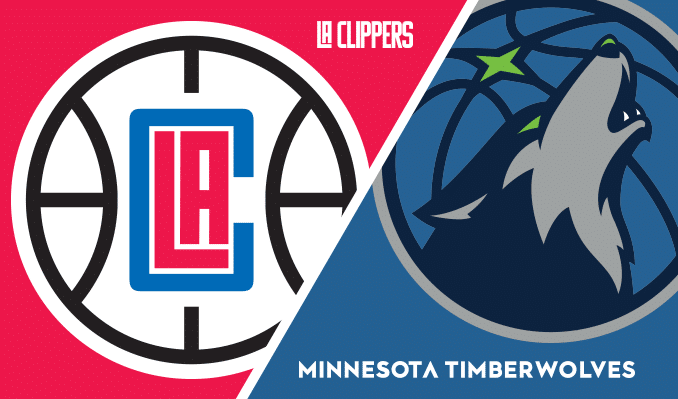 The Clippers will be hoping for a similar outcome after comfortably covering the 2.5-point spread against the Toronto Raptors in their last game, 112-92. The game’s combined points (204) came in well under the projected point total of 223. Los Angeles’ effective field goal percentage was their biggest advantage over Toronto. The Clippers had a rate of 0.512 (below their season average of 0.521), while the Raptors posted a mark of 0.398 (below their season average of 0.531). Los Angeles received a boost from Kawhi Leonard, who was the team’s high scorer with 23 points on 8-for-14 shooting.

In the Timberwolves’ last outing, they were beaten by the Utah Jazz, 127-116, despite being 1-point favorites. The total points for the game (243) finished well over the projected point total of 220.5. Utah’s effective field goal percentage was their biggest advantage over Minnesota. The Jazz had a rate of 0.663 (above their season average of 0.522), while the Timberwolves posted a mark of 0.522. With 32 points on 11-for-16 shooting, Jeff Teague was the top scorer from either team.

After the Clippers won two out of three meetings against the Timberwolves last season, these teams will battle for the first time this year. In the last contest, Los Angeles won 122-111. Los Angeles made 16 of its 32 three pointers (50.0 percent). Minnesota, on the other hand, had a much better offensive rebounding percentage (17.2 vs. 8.3).

Minnesota might struggle to score as they face off against one of the league’s best defenses. Los Angeles currently ranks seventh in defensive efficiency, while the Timberwolves rank 18th in offensive efficiency. Additionally, the Clippers rank first in offensive rebounding percentage (25.1 percent), while the Timberwolves rank 22nd in defensive rebounding percentage (76.3 percent).

The Clippers average 49.2 rebounds per game, which ranks second in the league. The Timberwolves rank 24th in rebounds allowed per game (46.8).

The Clippers rank fourth in assists allowed per game (22.4) while the Timberwolves rank 18th (24.6).

Minnesota averages 6.3 blocks per game, which ranks third in the NBA. Los Angeles ranks 16th in blocks allowed per game (4.9).

Over its last five outings, Los Angeles is 4-1 ATS with 4 unders and 1 over.

Minnesota is 0-5 ATS with 5 overs over its last five games.

The Clippers’ average margin of victory in their last five games has been 7.8, up from 7.3 for the season.