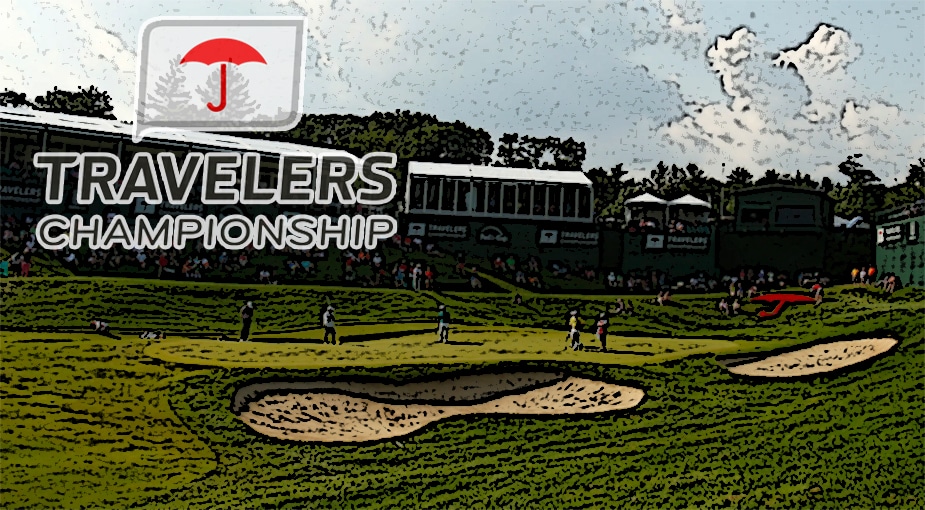 There is a lot of overlap this week between course form and recent form at the Travelers Championship. Last year’s event was the third in the return from the COVID shutdown, following the Charles Schwab Challenge and the RBC Heritage. This year, the Travelers falls in between the U.S. Open and The Open Championship, so we’ve actually got a strong field, despite being the week immediately after a major.

The convergence of course form and recent form has lowered the prices for a lot of players, so we’ll do the best we can to find some good betting values on the board at FanDuel Sportsbook.

Sign up now at FanDuel and get a Risk-Free Bet up to $1000 as your sign-up bonus, which you can even use on this week’s Travelers Championship.

Bryson DeChambeau is riding a string of three straight top-10 finishes at TPC River Highlands and he is the +1100 favorite, despite his epic collapse in the final round of the U.S. Open this past Sunday. Dustin Johnson, the reigning champion, is the second favorite at +1200.

Brooks Koepka usually doesn’t play these kinds of events, but with brother Chase in the field, he’ll be out there at +1500. Paul Casey, one of the course form and recent form “overlappers” is the fourth choice at +1600, followed by Memorial Tournament winner Patrick Cantlay at +1700.

The field does get weaker after Patrick Reed and Scottie Scheffler at +2300 and Tony Finau at +2900 off of his MC, but that’s where we get some course form guys, like Brian Harman at +3100, Abraham Ancer and Kevin Streelman at +3200, three-time winner Bubba Watson at +3700, and Charley Hoffman at +4400.

There are a lot of players that have had ups and downs this season that fill out the rest of the board, including guys that are looking to qualify for The Open Championship at Royal St. George’s from July 15-18.

TPC River Highlands is one of the most popular courses on the PGA Tour. It is also one of the shortest. Usually there are over a quarter million people that attend the tournament throughout the week, but attendance will be limited due to COVID-19 protocols. There will only be about 10,000 per day.

This is a par 70 that comes in at 6,841 yards. Distance off the tee is not the most important attribute, making this course a true diamond in the rough. SG: OTT is still important, as a lot of players hit greens in regulation, so driving the golf ball accurately is a big deal.

The reputation of this course speaks for itself with so many guys willing to make the trek from San Diego to the Hartford area. Bentgrass greens await the players and several holes feature water hazards. It is a good test of a player’s full game, as distance isn’t the great equalizer like it usually is.

A lot of the guys that have played well here have depressed prices this week, but they’ve also been playing well overall lately. Paul Casey has four top-five finishes here in his career. He also has top-10 finishes in the last two majors. That’s why his price is so low at +1600.

Kevin Streelman is a past winner and a runner-up with five top-10 finishes at this course in his career. He’s also got four top-20 finishes in his last four starts, so he checks both boxes, but it’s hard to bet him at +3200 given the other names around him.

Other winners include Bubba Watson, who has three, Phil Mickelson, who won back-to-back years in 2001 and 2002, Marc Leishman, who has the win and three other top-25 finishes, Jordan Spieth, and even Chez Reavie. Stewart Cink is in good form and has two wins on this course, with the most recent in 2008.

Well, a lot of the guys that play well here can double dip this week, like Casey, Streelman, and Ancer.

Harris English was third last week at Torrey and in the top 15 at the Palmetto Championship, so he’s playing well. So is Rickie Fowler, who failed to qualify for the U.S. Open, but had an eighth-place finish at the PGA Championship and followed that up with an 11th at the Memorial.

There are some pretty interesting names at bigger prices that have not been mentioned yet. A “hit-it-straight-and-make-a-putt” course is a good fit for Brendon Todd, who is +9500 this week at FanDuel. He was in the final group with Dustin Johnson last year, but faltered on Sunday. DJ did not and won the tournament.

David Lipsky is +21000. A 210/1 shot for a guy that was eighth at the Palmetto Championship in his first event stateside is not bad at all, given that he had four top-25 finishes in his previous seven starts on the European Tour. That seems like a good lotto ticket to buy.

You can take some chances this week with some big numbers on a short course.

SIGN UP AT FANDUEL SPORTSBOOK AND CLAIM YOUR WELCOME BONUS