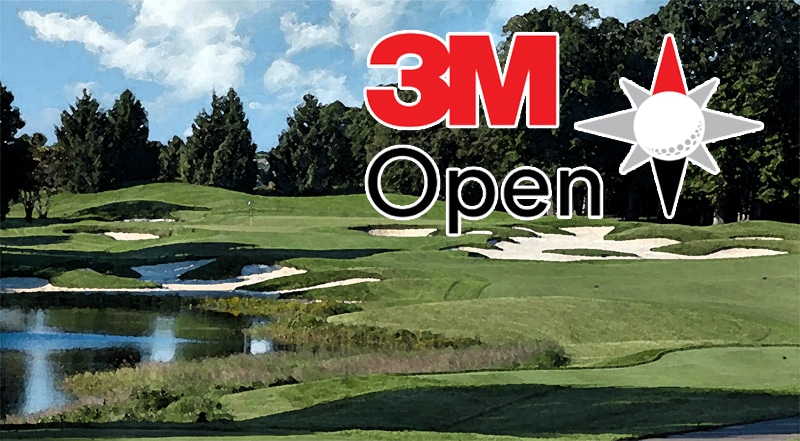 So far, two of the three M’s for the 3M Open have been Michael and Matthew, as Thompson and Wolff have been the winners of this event. We’ll see if a third M can take down the title with this weekend’s PGA Tour event at TPC Twin Cities.

Based on the odds, it seems fairly unlikely, given that Matthew Wolff and Maverick McNealy are the only ones with low odds, but we’ll count it if MacIntyre, Moore, or Merritt wind up winning the tournament.

We’ll be citing the golf odds over at FanDuel Sportsbook in this week’s preview. Sign up over there right now and get up to a $1,000 Risk-Free Bet as your welcome bonus.

This is a rather weak field, as we see a top-heavy odds board, but lack the depth that we’ve seen in other tournaments. Some are preparing for the Olympics in Tokyo. Some have stayed over with the European Tour. Others are just taking a break. After all, we’ve seen five major golf tournaments since the middle of November and it has been a busy stretch for a lot of players.

With Brian Harman’s withdrawal on Monday, this will go down as one of the weakest fields of the season to date and will be reflected in the Official World Golf Ranking points system. It is still, however, a full FedEx Cup points event.

TPC Twin Cities could end up being a real high-variance event. The hazards are truly the only hazards on this course. The rough will be cut pretty low and will not be nearly as penal as most events that we see. The fairways are pretty wide and the greens are pretty average, coming out around a 12 on the stimpmeter. They are also bentgrass, so that won’t be too bothersome.

The method of defense for this course is water, which can be in play on 14 of the 18 holes. Bunkers also protect the greens, but you can hit out of sand. You cannot hit out of water. It only makes sense that this course in the Land of 10,000 Lakes would have a lot of water hazards in play. That means that club selection will be important here.

Strokes gained approach has been the predominant statistical metric the last two years. Being a good putter helps as well, but proximity to the hole and a good second shot are really the most important factors. The par 5s are very gettable as eagle holes. The par 3s are long, so those are the holes that matter the most with the mid-irons.

Well, we only have two tournaments to pick from, so this is a light week on course form data. Michael Thompson and Matthew Wolff are the winners. Adam Long had a solo second last year, while Bryson DeChambeau and Collin Morikawa tied for second in the first year of the event.

There was a nine-way tie for third last year with Charles Howell III, Charl Schwartzel, Alex Noren, Tony Finau, Emiliano Grillo, Cameron Tringale, Max Homa, Robby Shelton, and Richy Werenski. Homa is the only one not in the field this week.

Back in 2019, Adam Hadwin, Wyndham Clark, and Carlos Ortiz were the others in the top five. There was a six-way tie for seventh with Sam Burns, Joey Garber, Lucas Glover, Brian Harman, Hideki Matsuyama, and Troy Merritt.

While a lot of the players in this field are not household names, we do have a lot of recent winners and high finishers. Cameron Davis won the Rocket Mortgage Classic. Lucas Glover won the John Deere Classic. Seamus Power won last week’s Barbasol Championship, the alternate event to The Open Championship.

There are a lot of high finishes. Louis Oosthuizen tops that list with a third last week at the British Open and two runner-up finishes in his last five starts. Troy Merritt was second at the Rocket Mortgage Classic. JT Poston was second last week in the Barbasol. Dylan Frittelli, who had a top-20 finish here last year, was fifth last week in England.

This is a wide-open tournament. A lot of guys will post good scores this week. Focusing on SG: APP seems like the best course of action, as there are a ton of birdie and eagle holes on this golf course.

Jhonattan Vegas is one of the best ball-strikers and one of the longest off the tee in this field. He’s a good price at +7500. You can really go long and look at Matthew NeSmith at +16000. He is the second-best player in the field in SG: APP this season, trailing only Keegan Bradley.

Emiliano Grillo is the shortest price at +3900. He’s 12th in SG: APP and has been playing some fine golf of late.

Keep an eye out for matchups, 3 balls, group bets, and all sorts of other wagering options as the week goes along at FanDuel Sportsbook.